Officially summer is only five weeks old, yet already Eagle Landing has sparkled in the Florida sunshine with champions in Ladies tennis and the Eagle Landing Rays Summer swim team!

Tennis
The Ladies USTA 3.5 40 & Over from Eagle Landing prevailed over the very strong and talented Orange County/Seminole counties (Waterford Lakes of Orlando) 4-1, winning both singles matches and 2 out of 3 doubles teams. 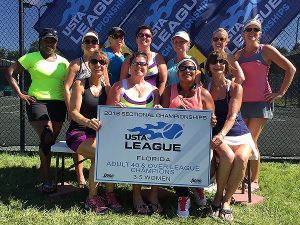 Their next challenge?  They will proudly represent the USTA Florida Section at the USTA League 40 & Over 3.5 National Championships on Oct. 21-23, 2016 at the Rancho Las Palmas Resort in Rancho Mirage, Calif.